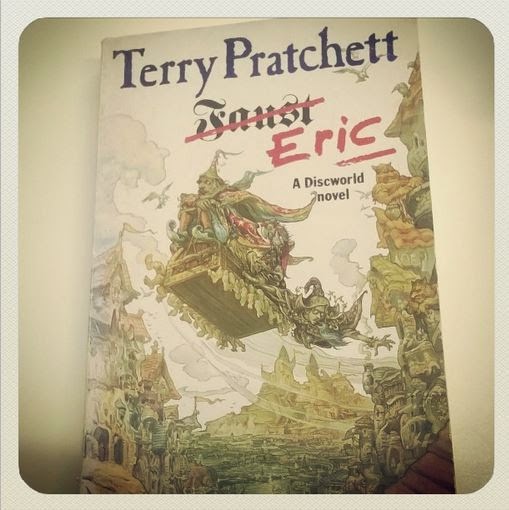 There are Discworld books I read over and over, and there are Discworld books I'd never read, although I am trying to remedy that this year, and have only about half a dozen left to go. I don't want to rush through the last few, though, especially knowing that there won't be any more. I have read Eric before, but not for twelve years. I read it when I was studying Marlowe's Doctor Faustus for A-Level English, and so could appreciate Eric as a parody of the legend. In Pratchett's version, the would-be magician is in fact an incompetent brat of a teenage boy with a one-track mind, and instead of conjuring a powerful demon, Eric produces... Rincewind, the hapless "wizzard."

Though published after Guards! Guards! (the point at which the Discworld series suddenly "gets good,") Eric feels much more like the earlier books in the series, when the series was simply a parody and subversion of classic fantasy and mythology. It is full of giggle-out-loud wordplay and observations, but has not yet achieved the sharp satire that I've come to associate with Discworld. As well as the Faust legend, Pratchett takes Rincewind and Eric to the Disc's equivalent of Troy, and, of course, subverts everything you think you know, from the famed "most beautiful woman in the world" to the wooden horse (oldest trick in the book, but both parties have read the book and therefore events take a different turn.) There is a fair bit of hopping about within the space-time continuum which is not very easily explained. Again, it fits in better with the early Discworld before it became fully-formed and rounded.

The Rincewind stories tend to be more loosely-plotted than, say, the Watch books, or the Witches, due, I think, to the nature of the character. Rincewind is a coward, and his tale is one of running away from one misadventure and falling headlong into another. Eric is an amusing and entertaining read, and as one of the shortest books in the series (155 pages), it is easy to read in a single evening. However, it never made it onto my regular-reread list, and with so many other excellent books to choose from, that's not likely to change.