Rainbow Rowell is a name I've seen all over the book blogs the last few months, but Ellie's review of Attachments was what prompted me to buy one of her books for myself. Unable to find a copy of Attachments anywhere, I settled on Eleanor and Park instead; after all, it had been on my wishlist for a
while. 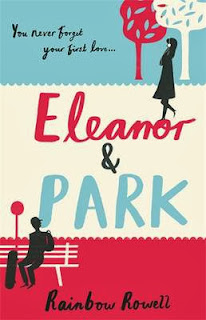 When Eleanor steps onto the school bus for the first time, she is all too aware that everyone is staring at her. She can't help but stand out, with her wild red hair and mismatched clothes. But she doesn't stand out in a Manic Pixie-girl way; she stands out in a Carrie White way. A Katherine Edwards circa 2001 sort of way. From her very first day, Eleanor has been marked as the bottom of the food chain. That girl's just weird, think her classmates, and not in a cool way. As she looks desperately around for somewhere to sit, Park Sheridan takes pity on her. On this school bus, seats are allocated for life - or at least for the school year - and woe betide anyone who sits in the wrong place! So Park and Eleanor are stuck sitting together, and though they don't speak, they bond over comic books and music, and a friendship of sorts develops. And as Park gets to know Eleanor better, he discovers dreadful things about her life, both at home and at school.

For a moment, when I read Eleanor's reflections on "the bus situation" in her first chapter, I thought what bus situation, exactly? The other kids stared at her and wouldn't let her sit next to them. Yes, it sucks, but it's not exactly the end of the world, is it? And compared to the other things Eleanor has to deal with - poverty, an abusive stepfather ruling the house with terror, looking after four younger siblings, Carrie-style bullying from the other girls at school - it's not much. But then I remembered my own high school days, and the number 51 bus and all its horrors. Being the unpopular kid is not much fun at school, but without any adult supervision (because the bus driver barely counts) it is the perfect opportunity for the bullies to let loose on you. You're trapped in a metal can with your worst enemies for twenty minutes, and there's not a lot you can do but try to ignore them the best you can, and hope they'll get bored. Confession: I sometimes used my lunch money to catch the public bus home, rather than the free school bus. Some drivers would let me use my bus pass on public transport, others I was too timid to even ask.

At least I had a good, loving family. I was not prepared for the awfulness that was Eleanor's home life, where five siblings would huddle together in a single bedroom as their stepfather raged at their mother, trying not to alert him to their existence or do anything to make him worse. Where there was no door to the bathroom, and no shampoo, toothbrushes or much food. Where everything that would be considered normal teenage behaviour - friendships, phone calls, babysitting jobs, learning to drive, never mind dating - had to be conducted under secrecy for fear of Ritchie's anger. Eleanor's helplessness was so upsetting: thank goodness for Park. Without him, this story would be all doom and gloom - and who knows what might have happened if Eleanor had telekinetic powers! But Park's friendship and later love provide a refuge for Eleanor, a place to go where she can be happy and survive, despite everything, though always in fear of discovery. Their relationship is heartwarming, very funny and gloriously geeky as they bond over comics - X-Men, Swamp Thing, and the ongoing series of The Watchmen. I read Watchmen earlier this year and loved it, so it was great to follow the duo reading it as a serial. Also, Eleanor hates being made-over but Park wears eyeliner and looks great. There are Star Wars and Star Trek references, and this book really made me want to listen to the Smiths again. Just a few songs at a time, though. I don't want to get too miserable. 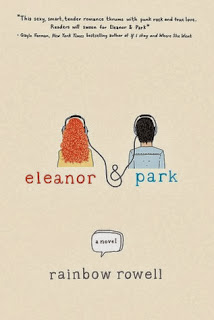 Early on in the novel, Eleanor voices my objections to Romeo and Juliet - I love Shakespeare, but hate that story, or at least, don't consider it the great romance and tragedy that everyone else does. (I know, I know, I have a heart of granite.)


"Romeo and Juliet are just two rich kids who've always gotten every little thing they wanted. And now, they think they want each other."

I've never had much patience with these young, all-or-nothing romances, and yet Eleanor and Park got to me. I think the book spoke to my inner teenager; there was a bit of longing in me as I read it. Park is an absolutely lovely boy, and the thought of someone like him falling for someone like me as a teenager was more than I could have hoped for. My feelings changed along with Eleanor's, through the growing romance and I so desperately wanted things to work out with the couple. It is a cute but not cutesy relationship, with the necessary complications of anything which involves two insecure people. These are two young people who need each other. Such a need could destroy them, but instead it strengthens them.

In Eleanor and Park, Rainbow Rowell created two characters I deeply cared about, not just as individuals, but as a couple. This is rare for me. I don't do "shipping" and generally romance is a thing that is to be endured for the sake of the story. But this time, the romance was the heart of the story, and it made me cry. That's quite an achievement. Perhaps I'm getting soft.

"Maybe I'm not attracted to real girls, he'd thought at the time. Maybe I'm some sort of perverted cartoon-sexual."


"She tried to remember what kind of animals paralyzed their prey before they ate them...

Maybe Park had paralyzed her with his ninja magic, his Vulcan handhold, and now he was going to eat her.

That would be awesome."