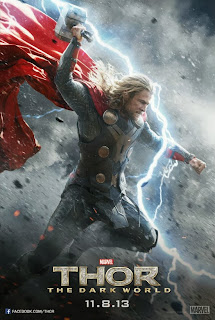 Last year's Avengers Assemble ruined my conviction that I could not be havin' with superhero movies, that they just did not interest me. I saw it at the cinema, bought the DVD and somehow managed to watch it three times in a single week, before going out to acquire all of the prequels. Thor was entertaining enough, though quite thin on story, with some gorgeous visuals, erm... other gorgeous visuals, and some wonderfully laugh-out-loud funny parts.

But for the most part, I felt that it was a set-up for the main Avengers movie, introducing one of its heroes and its main antagonist. The Dark World takes place after the events of Avengers Assemble. Loki is in disgrace and in prison, while Thor and his Asgardian friends face a force of Dark Elves, led by Malekith, in a war which spans all of the Nine Kingdoms. The opening battle sequences were extraordinarily reminiscent of the prologue to the Fellowship of the Ring movie. 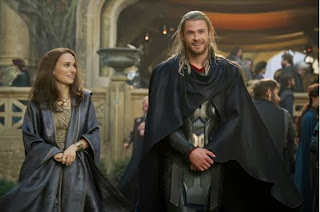 On Earth, scientist Jane Foster has relocated to London, where she can be found reluctantly on a date with a very sweet young man who just can't compare to the godlike being who swept Jane off her feet and then disappeared to fight aliens in New York and Asgard without even a phone call. Luckily, sassy intern Darcy crashes the world's most miserable date and drags Jane off to investigate some strange phenomenon. Upon closer examination, Jane gets either infected or possessed by the Dark Elves' deadly "Aether" power, but not to fear: in comes Thor in a suitably British rainstorm and whisks her off to Asgard.

Asgard is beautifully created on the big screen, an inspired combination of Norse mythology and science fiction which really shouldn't work, but does. The realm celebrates victory against Malekith, though everyone is aware that the war is not over yet. The best parts of Thor showed the Asgardian trying to adapt to an unfamiliar world; this time it is Jane's turn. This is where her lover calls home. Thor has matured since we last saw him, taking on responsibilities he hadn't been ready for until now.(There are also a few camera shots that were purely there for the female gaze, but let's appreciate this redress of the balance within the genre of comics and comic-book-movies. And Mr Hemsworth.) 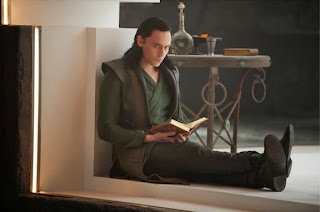 The first part of the film is enjoyable enough, easy to watch, but the brilliance really starts, unsurprisingly, when Thor enlists his brother Loki. Tom Hiddleston was always going to be the real star of this film, and he is hilarious with his smart one-liners, trickery and disguises. One disguise in particular is sheer genius, and will have Avengers followers cheering with glee. Yet there is also some sadness, when you actually get to see Loki with all his illusions stripped away, and again, a little later. Hiddleston slides effortless between quick-witted snark and breaking your heart, and back again. The plot twists and turns, as you might expect if you get the god of mischief involved, with betrayals, double- and triple-crossing. Thor might have his brother on his side through necessity, but trusting him would be foolishness.

Second to Thor and Loki's banter in terms of humour comes from Jane's back-up team: Darcy, Darcy's own intern Ian, and Erik Selvig, who seems to have lost some of his marbles - as well as his clothes - after the events of The Avengers. Thor asking for directions on the London Underground also brought a smile to my face. Thor brings the film's climactic battle to London, and I have to admit it was great to see London getting smashed by aliens on the big screen for once. I appreciated the CGI much more when it was familiar landmarks being destroyed, instead of it being "Oh, look, someone's broken New York again."

Finally, let me leave you with a short video clip of Loki conducting some very important research to answer the question of who is better, Thor or Loki, once and for all.