Richard and Judy discontinued their popular book club last year after leaving Channel 4. Its place was immediately snapped up by the “TV Book Club.” The latter’s success evidently alerted them to the fact that it was not yet a dead genre, for today the Richard and Judy book club made its comeback in conjunction with W.H.Smith and Galaxy. Their first chosen title, Sister is the story of a young woman, Beatrice,  investigating the disappearance of her sister, Tess. When all her friends and family become resigned to the seemingly straightforward answers they are given, Beatrice insists on digging deeper, looking beneath the surface and relying on her closeness to Tess to recognise when things don’t add up.

The novel begins at the end, so to speak, with Beatrice telling her story to a lawyer. The bulk takes place in the past tense, in chronological order, but there are enough glimpses into the present to tantalise and hint at the answers not yet revealed. In her past, Beatrice seems to be flailing around, grasping at any possible clues, and the short scenes set in the present leave you wondering which of her wild ideas, if any, lead to answers. 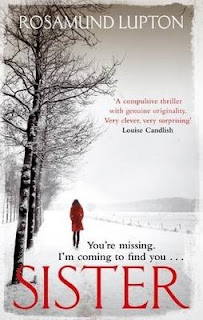 Although Sister is described on its covers and by the author as a thriller, I would debate that classification. The tone is too slow and contemplative to fit the thriller genre comfortably, although Lupton hooks you by creating a creepy and unsettling atmosphere. There is a real sense of loneliness and desperation as Beatrice battles with the world to prove a truth that no one wants to hear. I found myself reminded of a Nicci French novel, Secret Smile in which the heroine is the only person not fooled by her creepy stalker ex-boyfriend’s nicey-nice manner.

Yet there were moments when I sensed there was something unreliable about Beatrice’s narration. Perhaps she was too desperate to believe what she just knew against all the evidence. As I read on, I came to realise that the story was on Beatrice’s side, however, I was not quite wrong. At the very end of the novel, a sudden switch in tense revealed that one thread of the book was indeed not what it seemed. Although this thread was not strictly crucial to the main narrative and in retrospect it was cleverly written, I felt a little cheated. This thread was in some ways the most solid, reassuring part of the story, and felt more real than the main plot. To have that pulled out and proven to be a fabrication was rather jarring.

While reading Sister, I found myself reminded of several other books and authors:
Nicci French: Secret Smile for its lonely, claustrophobic tone and some plot aspects.
Elizabeth Winthrop: December: a former Richard and Judy favourite, just for how I felt upon reading it.
Emily Barr: The Sisterhood because of the relationship between sisters and my suspicions of the narrator.
Jodi Picoult: any Picoult book. There was a chunk where I really noticed the author had been reading up on her chosen subject, in this case about genetic research on unborn babies.
Stieg Larsson: Millennium trilogy, especially part 3: The Girl Who Kicked the Hornets’ Nest. There was a moment when I wondered just how big a cover-up was going on here, and who could be trusted.
Posted by Katie Edwards at 22:25