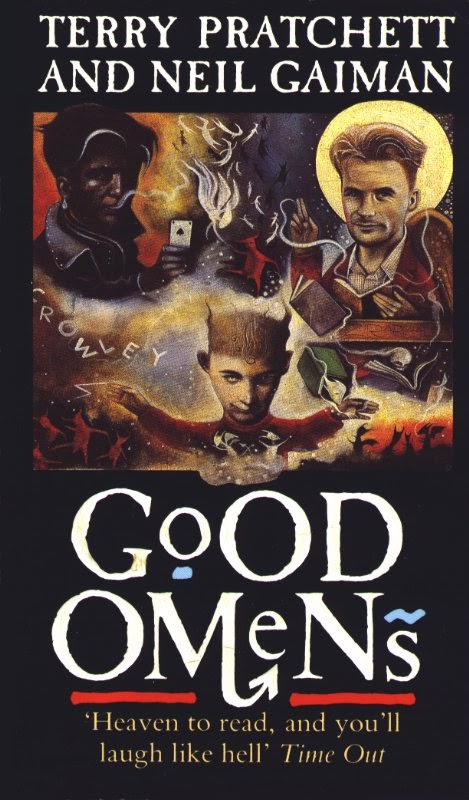 Crowley had always known that he would be around when the world ended, because he was immortal and wouldn't have any alternative. But he'd hoped it would be a long way off.

Because he rather liked people. It was a major failing in a demon.

The end is nigh. Very nigh indeed. It is up to Aziraphale, angel and part-time bookseller, and Crowley, "an angel who did not fall so much as saunter vaguely downwards," to make sure all goes according to the Ineffable Plan. But they have other ideas. Over the past millennia, angel and demon have spent a lot of time together, and a lot of time among humanity, and they don't want it to end.

Good Omens is a collaboration between two of the greatest creative minds of offbeat fantasy, Neil Gaiman and Terry Pratchett, and it is every bit as brilliant as you could hope: witty, irreverent and philosophical, a story of good versus evil on a cosmic scale as Armageddon approaches, with an angel and a demon as its most prominent protagonists. But ultimately, it is is a story about humanity, presented in microcosm in the form of the eleven-year-old Adam (who ironically isn't really human at all. Or perhaps he is exactly as human as he seems...)

Crowley doesn't have a very high reputation among his fellow demons, with their proud boast of tempting priests and corrupting politicians - while Crowley's biggest achievement is merely tying up the phone lines at lunchtime, causing a spread of bad temper and nastiness throughout the country. There is something very British, I feel, about how little minor inconveniences can do far more lasting and far-reaching damage than a more overt evil. Oh, [Crowley] did his best to make their short lives miserable, because that was his job, but nothing he could think up was half as bad as the stuff they thought up themselves.

It is remarkable how well Terry Pratchett and Neil Gaiman's writing styles work together. They have their differences in style - Pratchett was more overtly comic, for the most part, while Gaiman - though he masters a wide variety of genres - has a dark poetry to his writing. But in Good Omens, the two come together seamlessly. You cannot tell who wrote which part. (Allegedly, neither could they in some places.) The only line I would be willing to swear was the work of one author was: "and she held her sword, and she smiled like a knife," which is a strongly Neil Gaiman turn of phrase.

As well as Aziraphale and Crowley, Good Omens is full of colourful and wonderful characters: Adam Young and his gang "Them," The Four Horsemen (or bikers) of the Apocalypse (and the other four bikers of the Apocalypse) Sergeant Shadwell - the dour last Witchfinder in England - and his apprentice Newton Pulsifer, and Anathema Device, a witch and keeper of The Nice And Accurate Prophecies of Agnes Nutter. The book is packed with memorable scenes, lines and gags that spill out from the pages and become part of how the reader views the world. For instance: I take it as fact that any cassette (or CD) left in a car stereo will mutate into a Best of Queen album (which is why I felt it was really a bit superfluous to buy my sister that album for her birthday, although I did.) Elvis's cameo in a fast-food restaurant. (I DON'T CARE WHAT IT SAYS. I NEVER LAID A FINGER ON HIM.) A drunken angel waffling on about dolphins. A demon terrifying his house plants into growing properly. And really, I feel I've just scratched the surface of this book. It is not a long book, but it has so many wonderful, laugh-out-loud and profound moments. Go and read it! Or, alternatively, you could listen to the dramatisation. 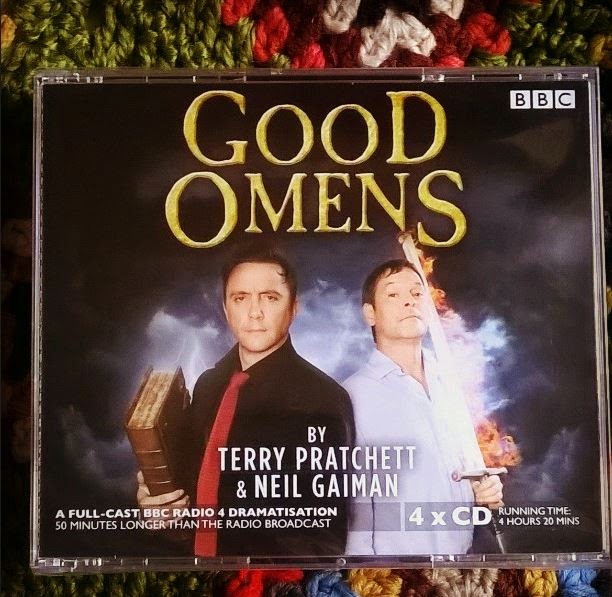 Last year, Good Omens was adapted by the BBC into a six-part radio drama, aired over Christmas, and is now available as a 4-CD set. (Just don't leave it in your car or you know what'll happen. The creative team behind it, Dirk Maggs and Heather Larmour, were the same people who adapted the star-studded Neverwhere last year. As with Neverwhere the casting is spot-on. Mark Heap is a wonderfully fussy Aziraphale, and Peter Serafinowicz brings the right balance of darkness and snarky likability to the role. The supporting cast, too, are wonderful (although Death did not sound quite right. Really, he needed to be Christopher Lee, but that is a small grumble.) There is even a small cameo from Neil and Terry as traffic cops in the first episode.

The original novel was written 25 years ago, but very little really needed updating: a little technology here or there. Adam and the Them, and the village of Tadfield in general, are right out of the first half of the twentieth century, before computer gaming consoles and health'n'safety. That's the village's charm, and kept that way unconsciously by Adam's supernatural powers. I was sorry that a couple of my favourite jokes were omitted or changed -  there is an allusion to the Queen gag, but it was not stated outright - while I was surprised that one or two lines made it in that are perhaps well past their use-by date. But overall, Good Omens is an utter treat, and I listened to it on Christmas week in bed, giggling madly to myself.

Radio drama is an underrated storytelling format, and very occasionally the exposition is a little clunky - a limitation of the format as you have to tell everything through dialogue. But apart from the rare moment of "people don't really talk like that," it is very well done, utterly engrossing, and the hours simply fly by.
Posted by Katie Edwards at 13:09